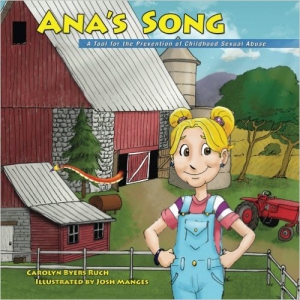 In her hayloft playhouse, Ana pretends to be an acrobat, a teacher, a lion-tamer, a singer and even a princess. Her kingdom, a safe place, where children are free to become everything they want to be. After she has a nightmare about a dragon who wants her to fly away with him and play a secret game, her father teaches her about a real-life “dragon” she may face one day—a person who might ask her to play secret games involving inappropriate touch. Later, someone Ana trusts tests her ability to keep secrets and say no, run, and tell. But because of Ana’s father’s wise teaching and loving relationship with his daughter, Ana knows what to do and who to tell.

Ana’s Song (formerly Rise and Shine), our book for girls, and Bobby Gilliam, Brave and Strong, our book for boys, will help you build a bridge of communication between yourself and the kids you love and long to protect. Please, read our stories. Begin the conversation. Build the bridge. Break the silence. So your children, like Ana, the heroine in Ana’s Song, and Bobby, the hero in Bobby Gilliam, Brave and Strong, are free to become all they were created to be.

Ana's Song (formerly Rise and Shine,), and Bobby Gilliam, Brave and Strong, are available in both faith-based and community versions on Amazon.com

Ana’s Song is a simple, direct, beautifully written and illustrated story for children. It is a “must read” for children and those who care about their safety. ~Dr. Robert J. Moore, M. Div., Psy. D

As an educator, I feel this is an excellent, non-threatening tool to use with children to simply and proactively teach them to recognize inappropriate behaviors and communicate with others when they sense something is wrong. ~Sarah Weaber, Elementary Teacher, Parkland School

Parents, kids, and those who work with them, all need what Ana's Song offers! I have found Ana's Song to both train and heal the wounded. ~Dr. John W. Merzig, D. Min.

In a child’s world, dragons lurk everywhere. Which are imaginary? Which are real? Which tickle a child’s imagination? Which kill innocence? Does your child know the difference? Does your child know what to do when faced by a fire-breathing abusive dragon? Prepare your child, provide an escape, save a life. In Ana's Song, there was nothing magic about the dragon Ana faced, nothing magic about how she escaped being abused. Loving, intentional parental direction prepared Ana: “Say ‘NO!’” “Run!” “Tell someone you trust!” Ana’s obedience brought her victory. Following Ana’s example will empower your child to do the same. ~Carol Wedeven, Children's Author, Speaker, World Traveler

You asked. We listened. You can now read our stories to your children. Your purchase keeps our site up and running for those who can’t order. We humbly thank you.