Okay, I’ll admit it. I didn’t like Mr. Rogers growing up. His slow pace and simplistic style seemed silly to me and ripe for ridicule. In fact, my Jr. High friends and I made fun of him much like you would imagine emotionally insecure adolescents might do. Someone would don a sweater and ask with slow paced speech and a big cheesy grin, “Can you spell stupid? Wink. I bet you can.”

I didn’t feel the slightest need to defend dear Fred. Perhaps it was because I never saw Mr. Roger’s Neighborhood as a preschooler, Fred Roger’s target audience. Our TV received only three channels, which didn’t include PBS.

Okay, I’ll admit it. Obviously, my adolescent friends and I needed the lessons Mr. Rogers taught.

Yet, with two movies released within two years, Won’t You be My Neighbor (2018) and A Beautiful Day in the Neighborhood (2019), I lined up with most of you to get a better understanding of this man who had spent his life devoted to the well-being of children. I wanted to learn from him alongside of you. I especially wanted to see if Fred Rogers gave any lessons connected to prevention.

I was enthralled with both movies. I cried at both. I was inspired by both. True confession, I came home after the latest movie, read several articles about it, watched a plethora of YouTube videos with or related to Fred Rogers, and even watched his memorial service. I’ll admit it. I have a crush. If Fred Rogers were still with us, I’m pretty sure my husband would be concerned. On more than one occasion, Ken has walked into my office, looked at my computer screen and with one eyebrow raised said, “Fred . . . again?”

Recently, I confessed my fascination with all things Fred to a girlfriend, who is a few years younger than I. She grew up in a broken home in a dangerous section of Philadelphia. She’s a bit crusty with an edge of cynicism . . . just the way I like her. I thought she’d roll her eyes. Wrong. She leaned in close, her voice a dreamy whisper, “Oh, I wanted him to marry my mother,” she said. Apparently, her TV received the signal from her local PBS station and Mr. Rogers hit his target audience. She grew up to marry a man who loves her like I imagine Fred Rogers loved his wife and children. I’d like to think Mr. Rogers Neighborhood gave my friend a glimpse of the possible to a little girl lost in the shadows of a chaotic home and unpredictable neighborhood.

As one who is passionate about the safety and well-being of children, specifically in the area of sexual abuse prevention, I must believe in the possible—that prevention is possible. So, as I read and combed through all things Fred, I searched for what Mr. Rogers might have said about children regarding hugs and kisses. I mean, wouldn’t it be great to have Fred Rogers’ endorsement for one of our prevention tips specifically related to body boundaries?

It didn’t take me long. I found my prize: Season 4, Episode 5 (#1555). Fred takes us on a field trip to the zoo to visit the penguins, which is delightful. He even got to pet the penguins. So jealous! But it is during the trip to “The Land of Make-believe” where my hero, Fred, shares a timeless message, via his puppets, regarding prevention without even mentioning sexual abuse.

Daniel Tiger is invited to a cousin’s reunion, but he’s afraid to go because he heard the phrase “kissing cousins” and he thinks cousins must kiss. Being the shy, introverted tiger that he is, he tells Lady Aberlin that he doesn’t want to kiss his cousins. Lady Aberlin assures him that although some cousins might show their love by kissing, not all do. She also assures him that he doesn’t have to kiss people if he doesn’t want to, that there are many ways to show people you love them, and she lists them. All is well that ends well in “The Land of Make-believe” and Daniel feels empowered to go to the reunion, his boundaries set.

But then, my man, Fred, doesn’t end there. Fresh back from “The Land of Make-believe,” before he removes his classic sweater and sneakers, he looks straight into the camera and hits a prevention homerun with this message to adults and kids alike:

When I meet a child, I usually wait until that child offers to kiss me, or hug me,

and that way, I know who it is who likes to kiss or hug. 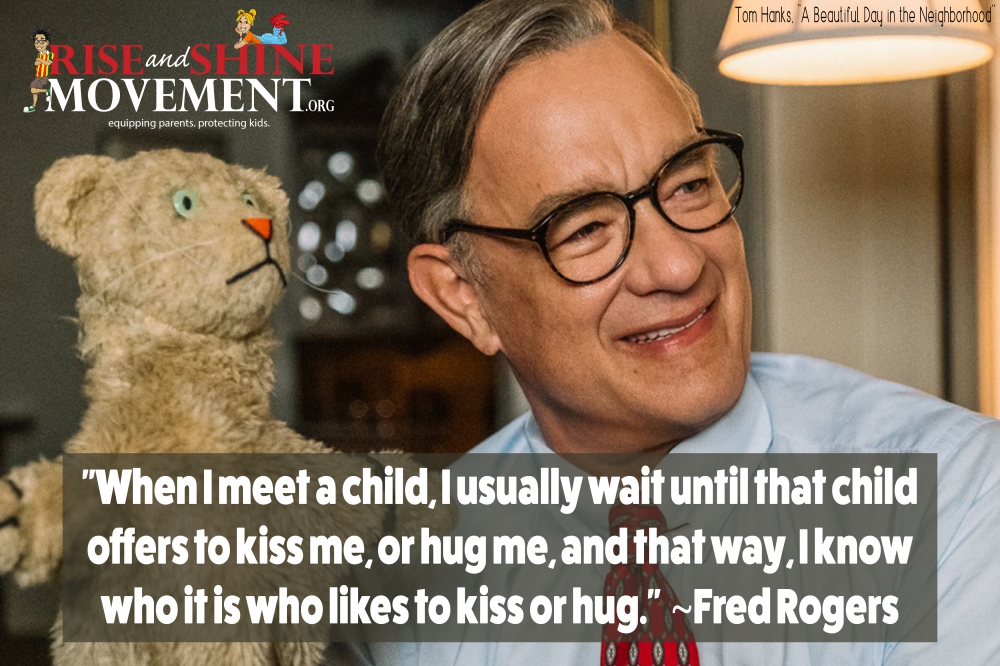 Hmmm, waiting on the child to offer a kiss or a hug. Respecting a child’s boundaries. Not expecting or demanding or forcing physical affection from a child. Teaching a child how to be respectful without disrespecting themselves. All prevention strategies and good advice for those of us tempted to squeeze the stuffing out of our favorite adorable kids, grandkids, nieces and nephews.